The early USSR period Soviet propaganda porcelain, has become a business card of our country, the same as the jeweler’s art of Faberge, icons, or avant-garde painting. Indeed, nowadays, products from porcelain cost much and sold at the famous auction houses. Meanwhile, vases, plates, cups, dishes and porcelain statuettes were in many Soviet families. But now, the best pieces of the USSR porcelain, and in particular, early Soviet Soviet era, so-called propaganda porcelain is rarity, worth of best museums. In addition, due to the unavailability of items and a sense of historical belonging, and of course, nostalgia for the recent past, such porcelain is now highly collectible. 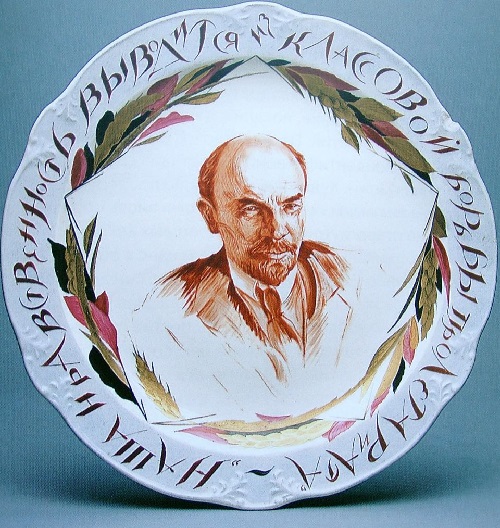 First of all, masters of the early Soviet period gave the country and the world the entirely new patterns, and an unprecedented level of small plastic arts and porcelain art. Energy of a new life and a change of ideology raised this seemed to have a well-established art form to a completely new level and gave it a new dimension. In the first third of the XX century porcelain was influenced by processes taking place in the artistic life, industrial and social spheres, greatly complicated in the post-revolutionary period. 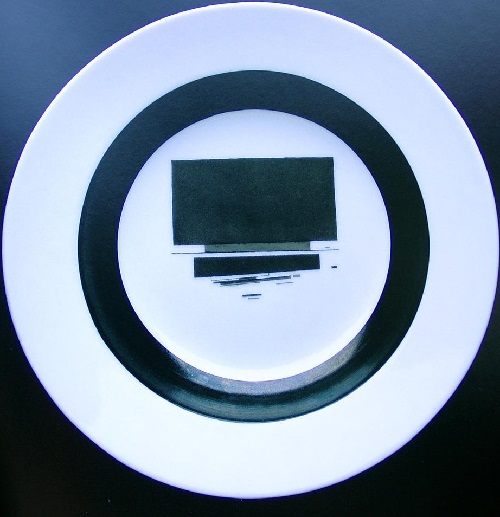 However, the most striking phenomenon in the Russian art of that time became so-called propaganda porcelain. Agitation porcelain with its open sonority of color, rhythm parts, symbols of the new time worked on a par with the slogan-appeal.

No wonder, porcelain products were the few articles of export potential of the young Soviet republic, and found its fans in different countries, even if they did not accept the Bolshevik ideas. However, the works of art of porcelain 1920 – 1930-ies are extremely rare and are quite expensive, so the circle of collectors is rather narrow and elitist. Typically, the period of propaganda porcelain finished in 1927. In subsequent years, new works with a revolutionary theme were not created, and the copied samples are still in demand, mainly commissioned by the foreign trade organizations. Industrialization (1927), collectivization (1929) and the Cultural Revolution (1929-1930) reflected in the sculpture and household porcelain, as well as articles on special orders. 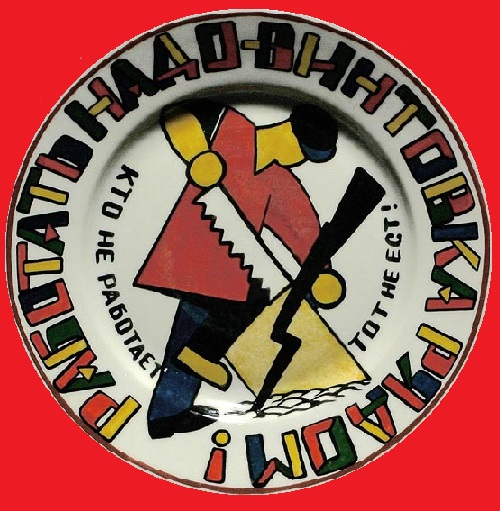 Meanwhile, the Soviet porcelain of the 1920s – 1930s underwent many fundamental changes. And most clearly manifested in decorating china forms and, mainly in technical innovations in execution of the decor. Besides, mainly focused on mechanical methods of reproducing images (printing, airbrush and stencil), the widespread use of which can be called one of the the most significant differences between products of the 1930s porcelain from the previous era. 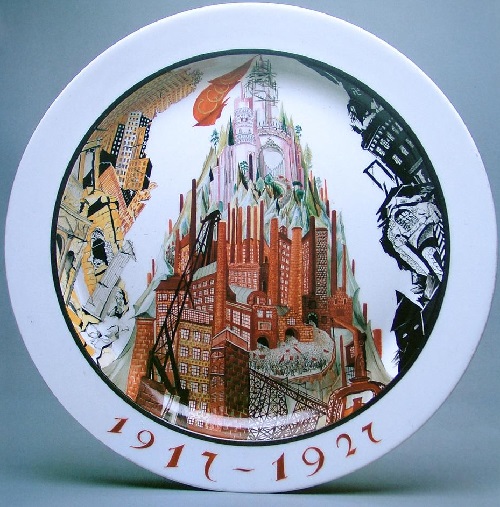 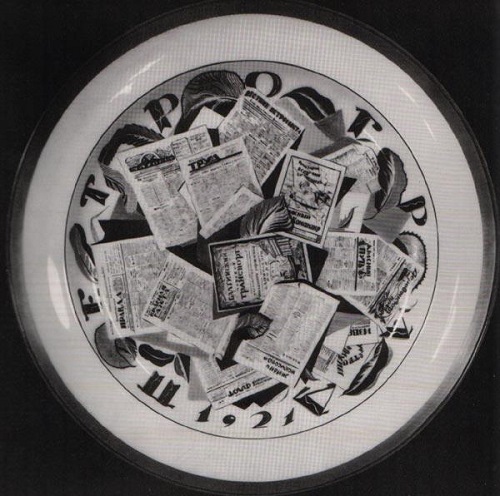 For propaganda porcelain factories approved reproducing drawings of metropolitan artists to create unique products with the symbols of the new government. Thus, in 1930-ies porcelain depicted examples of the new technology and architecture, metro stations and hydroelectric power stations, etc. The samples of the late propaganda porcelain included portraits of political figures, such as Joseph Stalin, Kalinin, as well as significant events of our time. 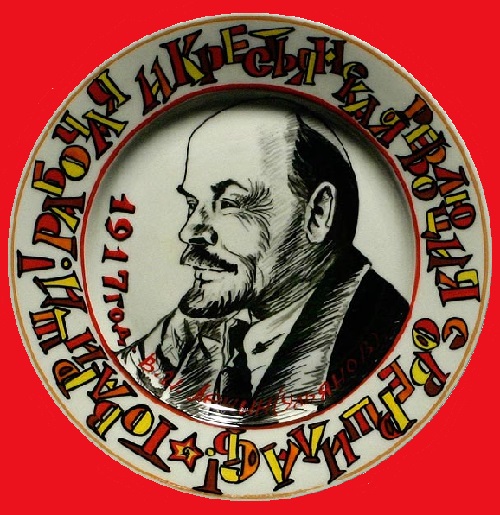 Working and peasant revolution has happened

Gradually, in everyday china appear schematic drawings symbolizing industry, the mechanization of agriculture, literacy, education through schools, and radio, the development of catering and personal hygiene. In addition, changed the technique of printing, with more airbrush stencil, without gold, but accompanied with respective images with inscriptions. For instance, “for a loan of tractors”, “Study on the radio”, “brush your teeth” and others.

In addition, from 1931 at the Soviet porcelain factories appeared artistic laboratories. As a result, the events that happened in the country those years, reflected in china. And among them – opening of first subway (1935) and the first non-stop flights, the channel construction of the Moskva-Volga (1932-1937) and the opening of Agricultural Exhibition (1939), etc. Besides, special attention was paid to the topics of national minorities, education and defense of the fatherland.

The products of the 1930s had stylistic traits of Soviet modification of Art Deco style, which refers to the time of 1932-1941. Also, in porcelain often used parallel combinations, such as “tissue-ceramics”, which was one of the generic features of decorative art deco. While some products of Pervomaisky, Dulevo and Dmitrov factories traced common ornamental motifs. Such decor as “Calico” with scattered over the surface small flowers or bouquets designed in many variations. Flowers were often stylized, eye-catching color spots lined up in a series of rhythmic, balanced harmoniously on the mold surface. 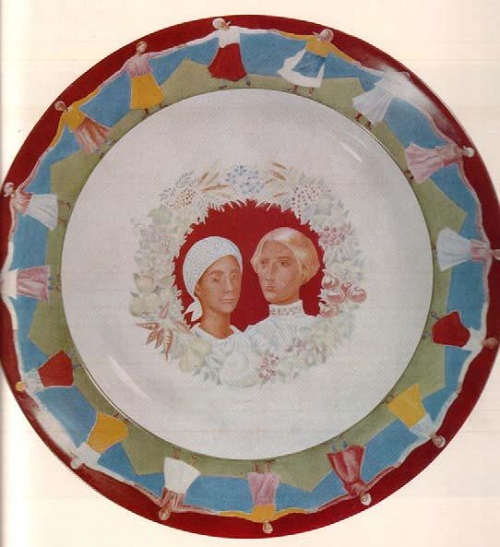 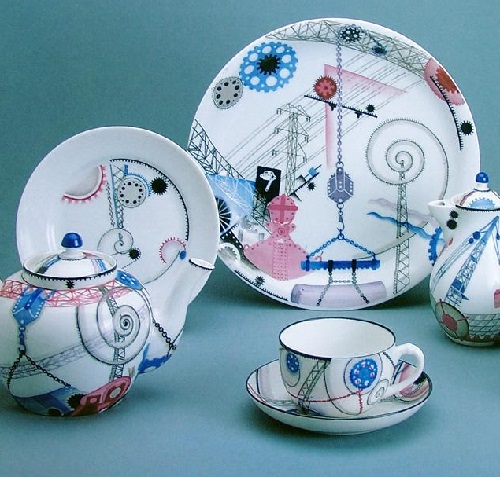 1927. Painted by LV Protopopova. The tea set ‘Way to Socialism’ 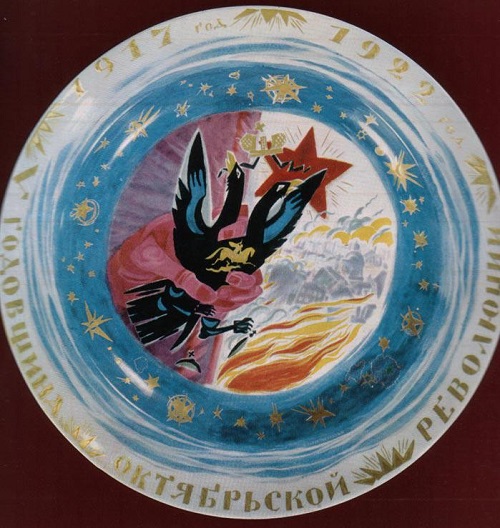 The dish to the fifth anniversary of the October Revolution. 1922. Artist MV Lebedeva 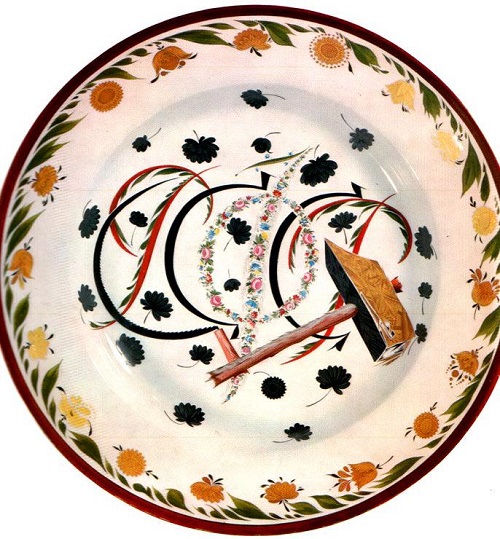 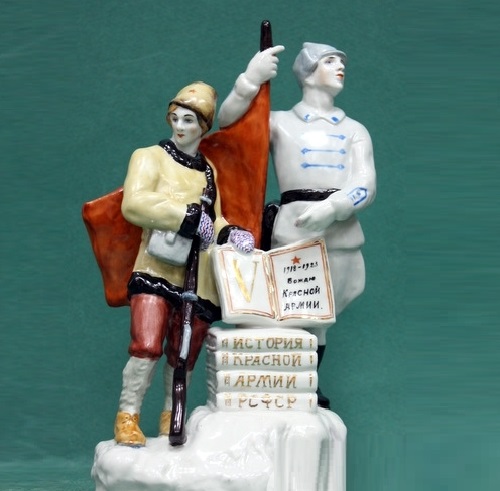 5 years to the Soviet Army 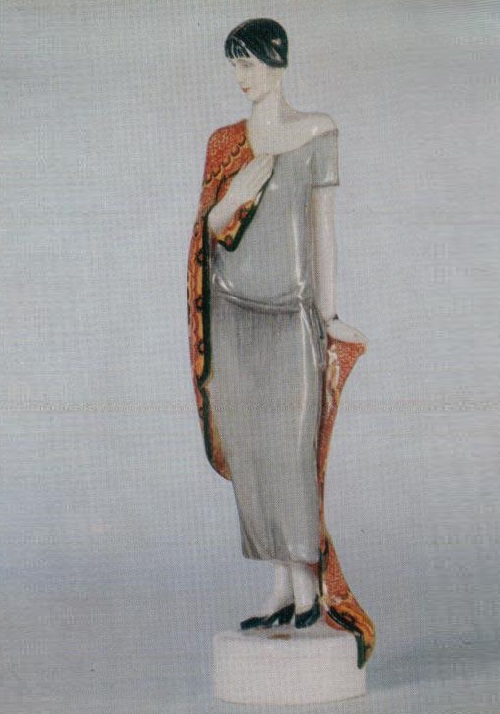 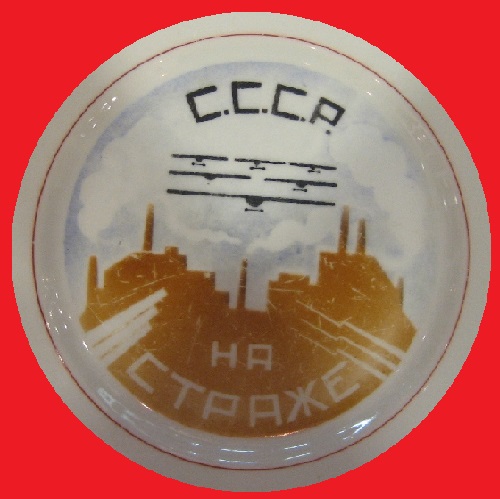 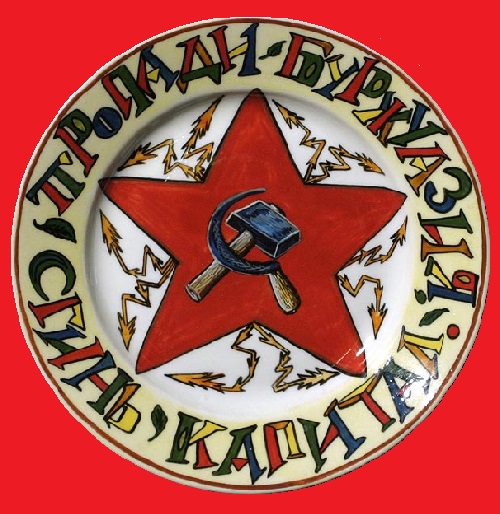 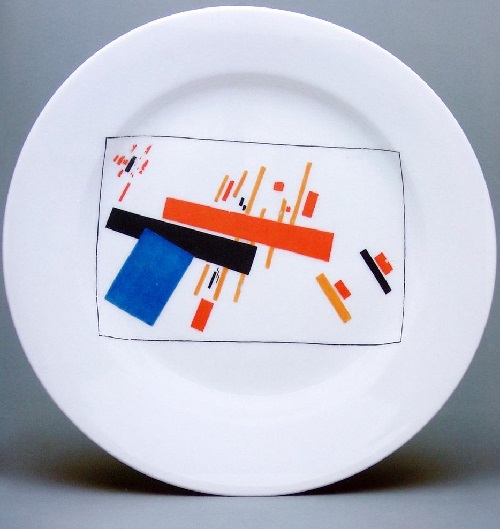 Plate ‘Dynamic composition’. 1926. Drawing by Malevich painted by AN Kudryavtsev 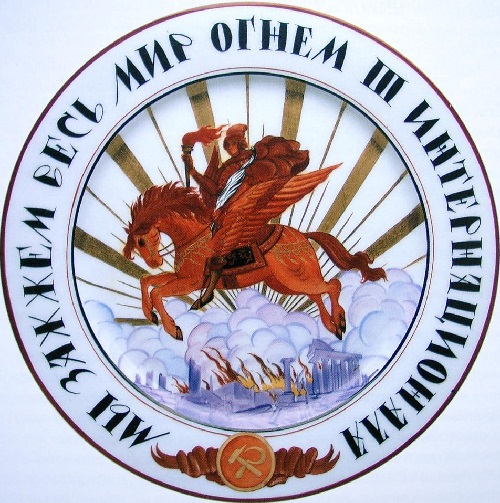 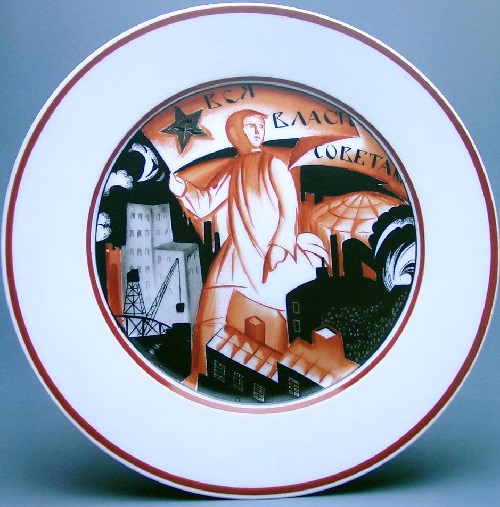 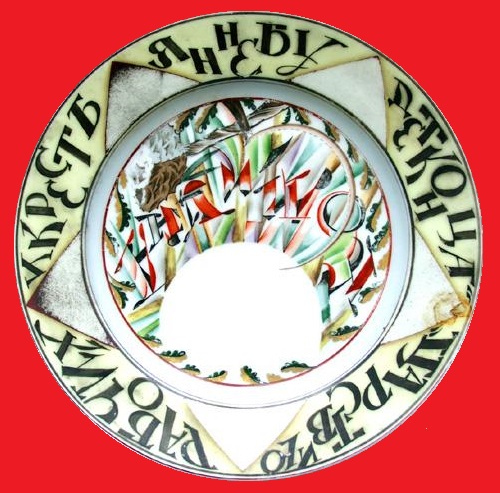 Porcelain dish with stylized letters meaning There will be no end to the peasant-worker state. Artist Chekhonin, 1922 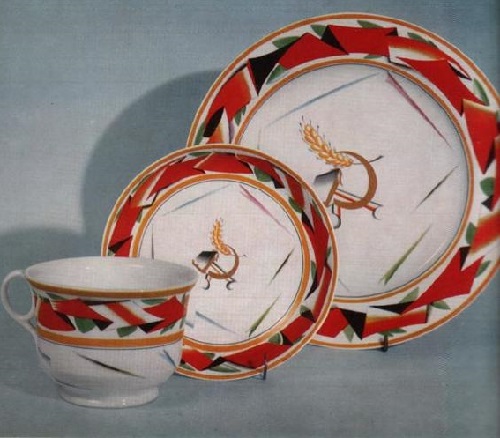 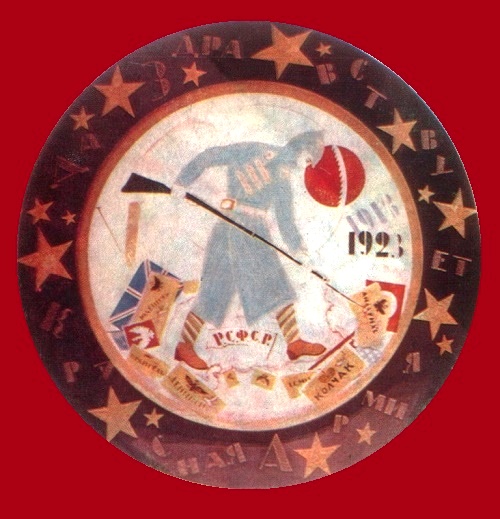 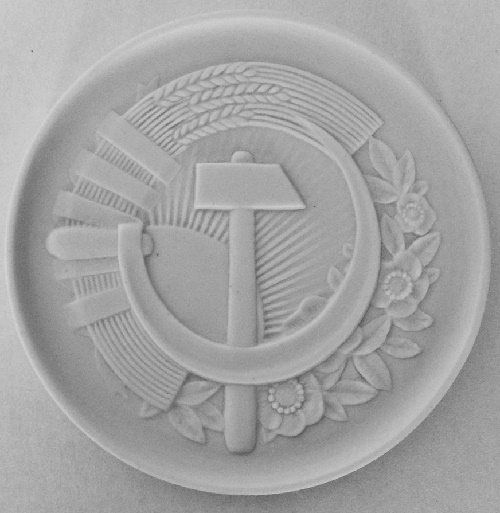 On the 50th anniversary of the October Revolution ‘Glory to October ‘. Porcelain, Leningrad Porcelain Factory, 1967 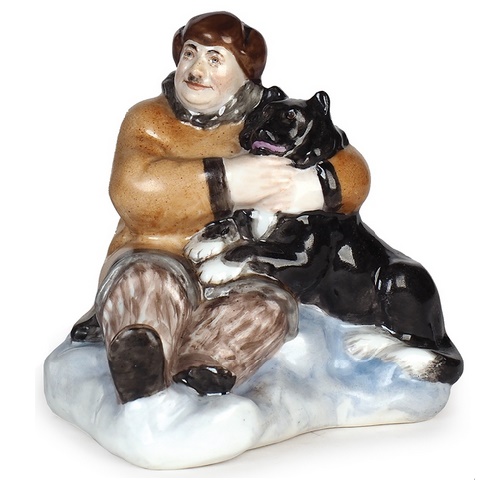 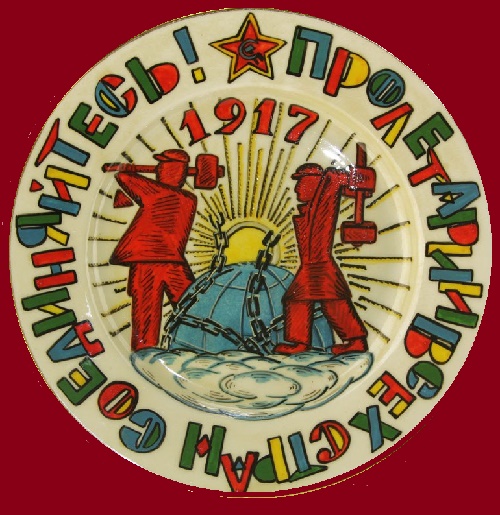 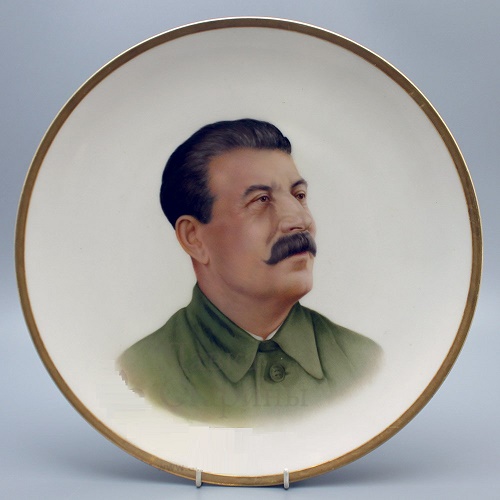 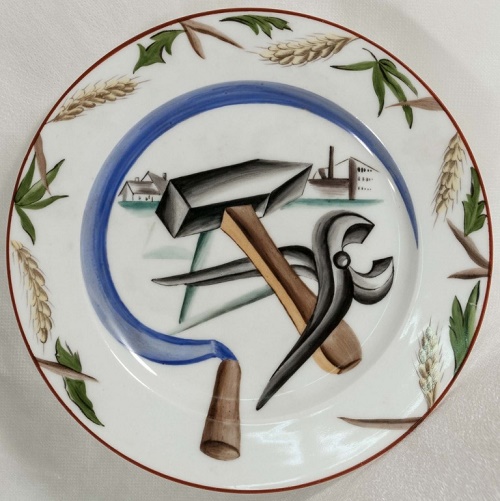