Active during the 1940s through the 1960s Zara Aleksandrovna Dolukhanova (15 March 1918, Moscow, Russia – 4 December 2007 Moscow, Russia) was fairly recognized as one of the leading representatives of the Russian Soviet school of chamber music. And this, of course, is fair. In her art, many of the characteristic features of the Russian vocal school, which originated, as we know, from Glinka, have concentrated. It is no coincidence that his romances invariably enter the concert programs of the singer. As an independent creative direction, the Russian school of chamber singing finally emerged at the beginning of the 20th century, when the performers presented a detailed panorama of the Russian romance, beginning with Glinka and ending with Rachmaninoff. With honed, filigree skill, the singer transmits the unique originality of Baroque music, the works of ancient Italian masters, Viennese classics, romantic composers, French impressionists, Soviet and foreign composers. 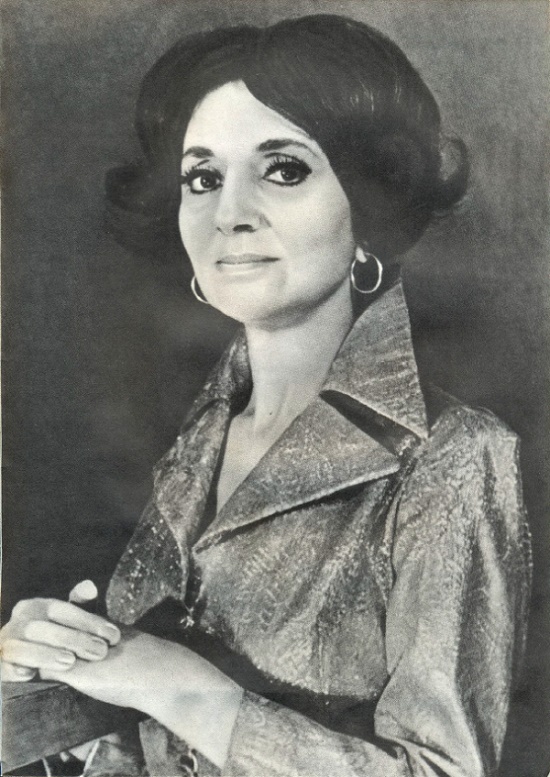 The life path of Zara Dolukhanova is not rich in external events. Born in Moscow, she grew in the family where they loved music passionately. The father of the future singer, a mechanical engineer by profession, played the violin and piano well. Her mother studied singing and playing the piano, and only family circumstances prevented her from completing her musical education. Zara’s musical talent manifested itself early. While still very young, she easily learned from her mother’s voice and memorized simple melodies, and from the age of five she began taking piano lessons. Simultaneously with studying in secondary school, the girl attends the regional children’s music school – here she learns playing the piano.

At thirteen, Zara enters the Gnessin Music School, where she begins to study violin. But the true vocation of Dolukhanova was discovered by the teacher of the Gnessin school VM Belyaeva-Tarasevich. She saw in a sixteen-year-old girl a singer of great potential opportunities and took her to her class. However, on her fourth year, Dolukhanova moved to Yerevan, and when she returned to Moscow, Belyaeva-Tarasevich was no longer alive. Zara Aleksandrovna did not think it was possible to finish the school in the class of another teacher.

In 1957, she passed an external exam at the Gnessin Institute. Her artistic career Zara Dolukhanova began at the Yerevan Opera and Ballet Theater named after A. A. Spendiarov. It was at the very beginning of the Great Patriotic War, in a terrible and harsh 1941. At that time the musical life in the capital of Armenia was substantial and intensive. Here lived and worked many famous performers who came from Moscow and Leningrad. And the opera theater did not stop hard work on new performances. The novice singer greedily absorbs new artistic impressions, recruited artistic experience, and really tries her hand at art. A three-year work at the Yerevan Opera House was a kind of prologue to Dolukhanova’s artistic life.

Soon Dolukhanova predetermined her future as a vocalist of exclusively chamber and concert plan. She moved to Moscow and in 1944 became a soloist of the All-Union Radio. Two years later, the singer performed for the first time in an open concert – in the Hall of Columns of the House of Unions. In a relatively short time, the young actress manages to quickly gain the recognition of listeners. She actively promotes the work of outstanding Soviet composers – Prokofiev, Shostakovich, Myaskovsky, Sviridov, Shaporin, and participates in almost all operas staged by artists of the Moscow Radio. Some of the radio performances that Dolukhanova performed (first of all, “Italian in Algeria” .. and “Cinderella … by Rossini), remained a significant milestone in the history of Soviet opera singing and put the singer among the most gifted vocalists of the younger generation.

In 1949, Dolukhanova’s first success comes in Budapest, at the II World Festival of Youth and Students. She confidently takes first place in the International Vocal Competition. This was the beginning of the international popularity of the singer. The fame that grows with each passing year, with every touring trip, and with every performance.

Since 1958, Dolukhanova – soloist of the Moscow Philharmonic. She annually gives dozens of concerts in different corners of our country and abroad, and persistently replenishes her repertoire. Her whole life is tireless work and search, selfless service to art and people. Dolukhanova happily combines in her performing creativity, bright emotionality and profound intellectualism. The volume of her voice was large (two and a half octaves), with unusually thick and juicy low notes, dense, saturated with “middle” and truly “soprano” in purity and brilliance in uppercase. Dolukhanova’s voice conceals in itself an infinite variety of timbre paints, subtle vocal effects. It impresses with inner harmony and perfect beauty.

The ancient Italian authors – Caldara, Stradella, Giordani, Pergolesi, etc. In their creations the element of feeling is dominant. A living, eternally changeable: that tenderly melancholic or slyly smiling. The voice of the singer seems to be poured with the juices of the awakening nature. In it – fire, brilliance and bliss. Her performance captivates with the amazing fascination of sound, amazing plasticity of sound.

In her concerts she systematically refers to the works of the opera genre. And yet, after a short stay in the Yerevan theater group, Dolukhanova never again appeared on the opera stage. Why? Indeed, many music lovers asked this question. The directorate of the London theater, Covent Garden, for example, tried to specifically invite the singer to the role of Amneris in Verdi’s Aida. Unfortunately, unsuccessfully. Dolukhanova refused to perform on the opera stage, although she could sing in the opera with no less success than on the concert stage. One way or another, but for a long time Dolukhanova didn’t return to the opera scene.

The world of deep lyrical experiences, refined psychological nuances, seemed to interest her in a much greater degree than the heightened expression, and drama of the opera house. However, the great potential of the artist in the embodiment of the images of emotional, passionate-pathetic could not remain undisclosed.

According to the reviews of musical criticism, Dolukhanova, “a luxurious, velvet, unforgettable beauty of the timbre mezzo-soprano”, to everyone’s surprise, turns to the repertoire of … a dramatic soprano of “verist” type! It was in 1963. Not only from time to time (as it used to be), she includes soprano arias in her programs. For example, Norma, Laurettes (“Gianni Schicchi” by Puccini), Maddalena (“Andre Chenier” by Giordano). No, the singer starts to consider the operatic repertoire of the dramatic soprano as a new and important area for her performance. And Zara Dolukhanova sings the arias of Floria Tosca, Manon Lescaut, Aida, Chio-Cio-san, and Mimi. At one of her concerts, Tatyana’s scene from “Eugene Onegin” sounded with great expression, a real soprano sound, very dense and juicy.

Dolukhanova’s top achievement in the soprano repertoire was, perhaps, her performance of the role of Angelica in the one-act opera by Puccini “Sister Angelica”. First shown in our country on the stage of the Great Hall of the Conservatory in February 1969. The outstanding vocal skill of Zara Dolukhanova was revealed here in all its splendor.

And her performances rarely do without new work in the Soviet repertoire. Interesting in this respect was, in particular, Dolukhanova’s solo concert in the Great Hall of the Moscow Conservatoire in February 1976. Then the singer made a new vocal cycle of Gavrilin – “Leaflets of an old album”. Taking as a basis the original verse texts of the old home album, Gavrilin created a beautiful lyrical work full of trembling feelings, and penetrating poetry. At the same time, he is not stranger to the notes of dramatic impetuosity, which Dolukhanova brilliantly emphasized with her performance. She gave the entire cycle a rare artistic completeness and organicity in the change of various shades of mood.

In the same concert for the first time, sounded new songs by Mark Minkov – “Mignon” and “Take the Drum and Do not Be Afraid!”. By the way, the works of this young composer appear regularly in Dolukhanova’s programs. So, she was the first performer of his vocal cycle on Garcia Lorca’s verses. It was romances, subtly recreating the national color and figurative structure of the poetry of the great Spanish master.

For decades of intense and multifaceted artistic activity, Zara Dolukhanova performed many times in the best concert halls of Europe, North and South America, Asia, Australia and New Zealand. In most of the world’s largest cultural centers, the singer performs regularly and with constant success. Dolukhanova’s popularity in the USSR and in the whole world is exceptionally high. She received many honorable awards and titles. Among them – the People’s Artist of the RSFSR and the Armenian SSR. In addition, the World Peace Council awarded the singer with the Certificate of Honor “For Outstanding Contribution to the Strengthening of Peace and Friendship among Peoples” (1959). Besides, Zara Dolukhanova – the USSR State Prize (1951) and the first Soviet vocalist – Lenin Prize (1966) laureate.

Meanwhile, the activities of an outstanding artist were not only concert performances and records. In particular, in Dolukhanova’s creative interests was pedagogy. She led a singing class at the Gnessins Musical Pedagogical Institute in Moscow, and taught the young vocalists in courses of vocal skill in Weimar and Mexico. A wonderful singer, who in the prime of her talent, generously shared the secrets of mastery. She sought to convey to her pupils a careful and quivering attitude to music, the pursuit of excellence and creative burning. The qualities that allowed her to reach more and more artistic heights. 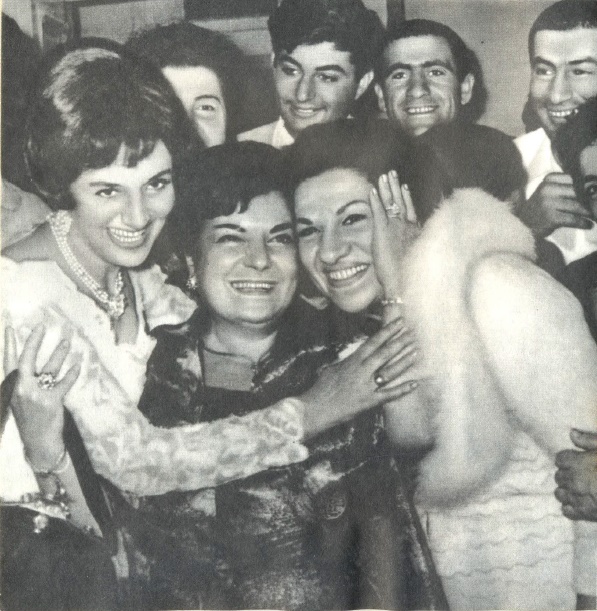 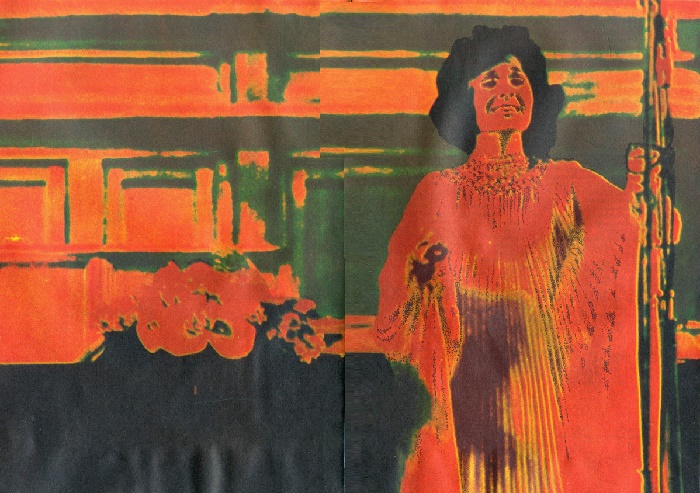 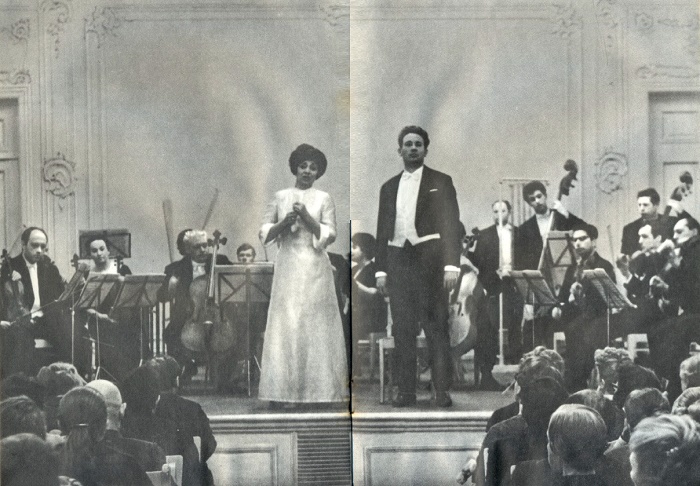 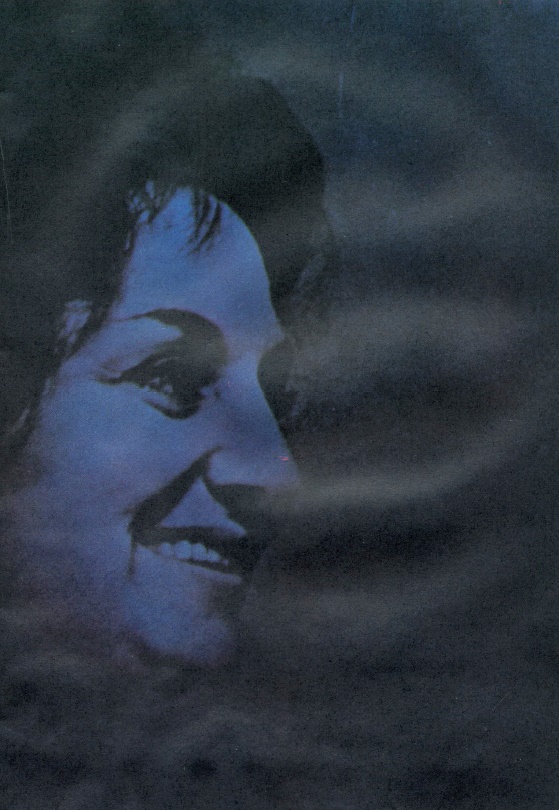 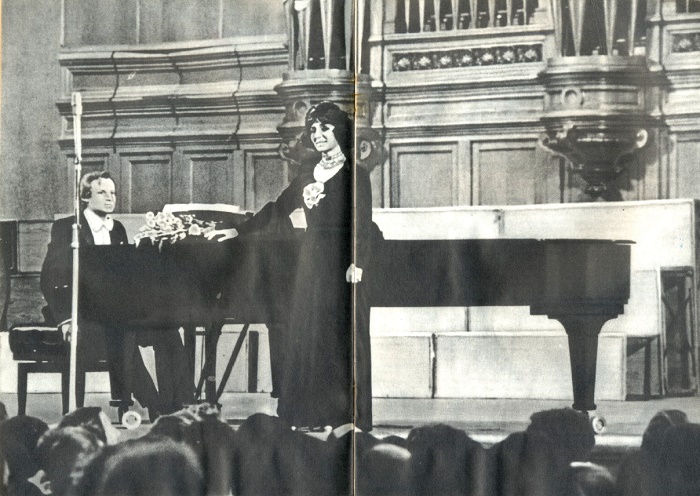 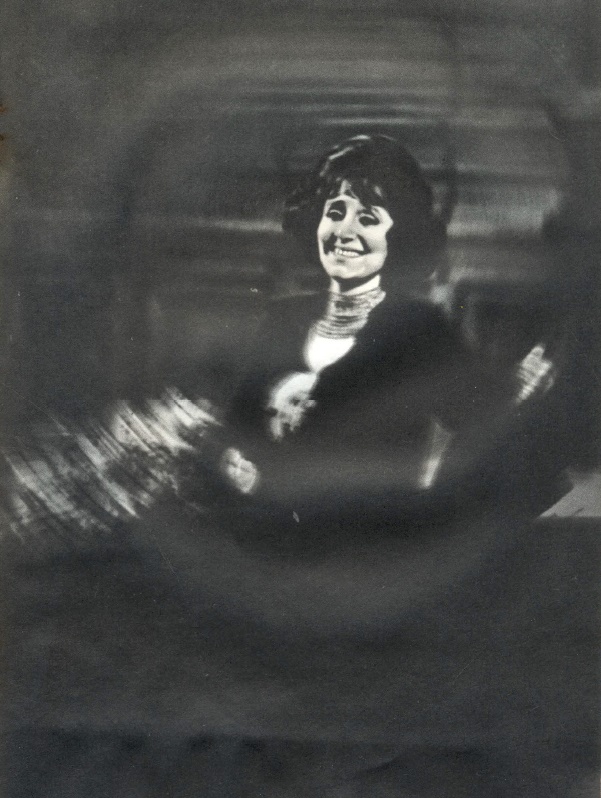 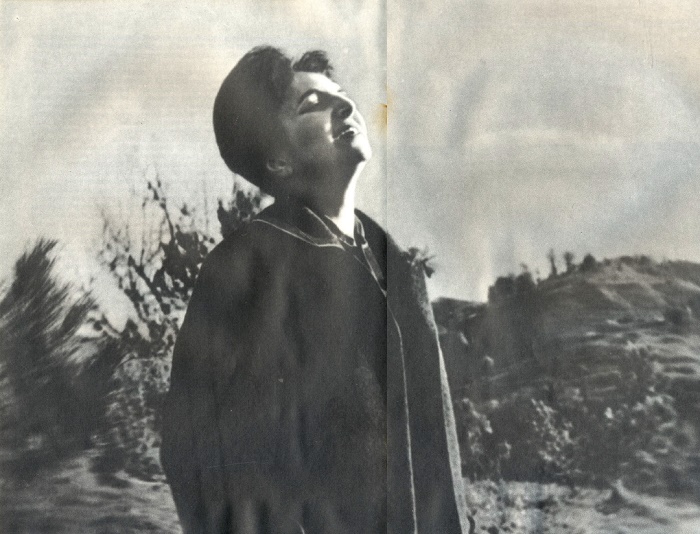 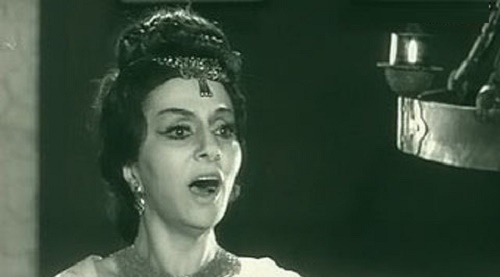 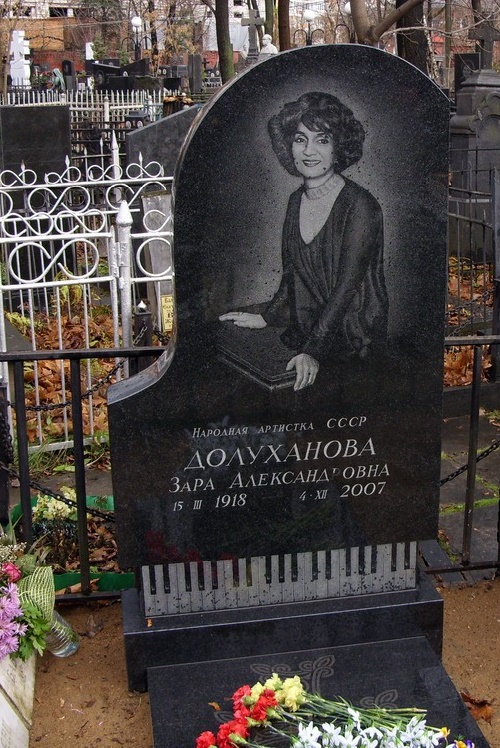 The grave of Dolukhanova in the Armenian cemetery in Moscow 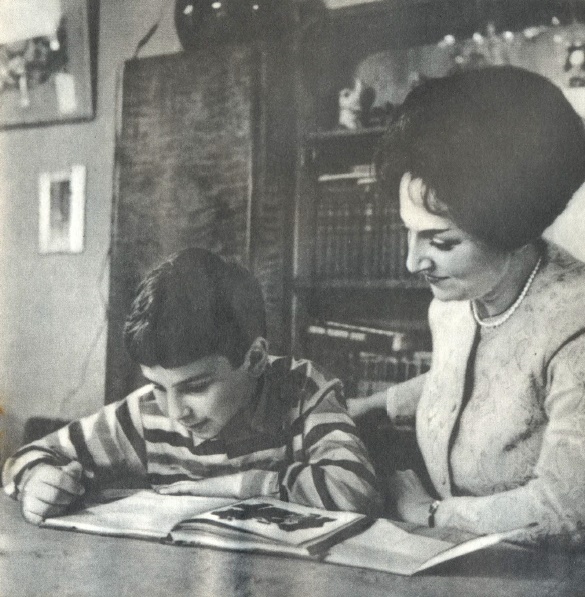 With her son, Zara Dolukhanova 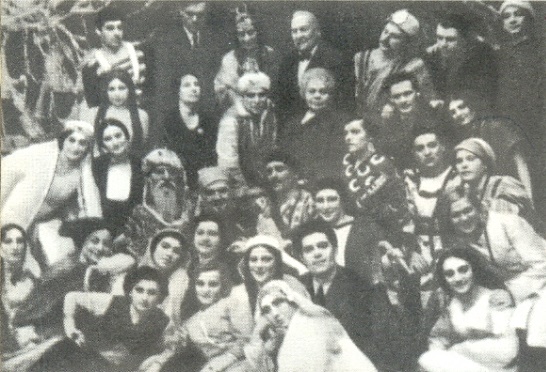 Among the students and teachers of Gnesin Institute (front row, far right) 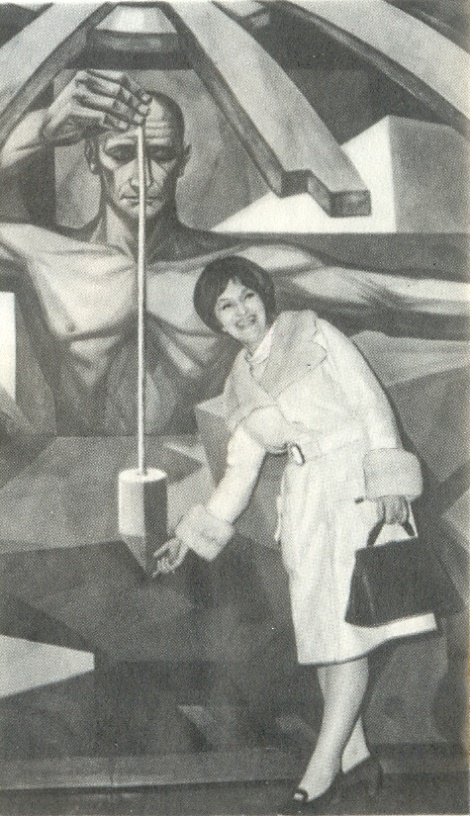 In the building of the UN Secretariat in New York, a painting by Vela Zanetti, symbolizing the creative power of mankind 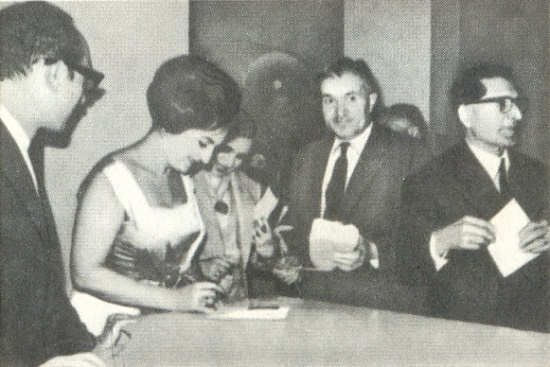 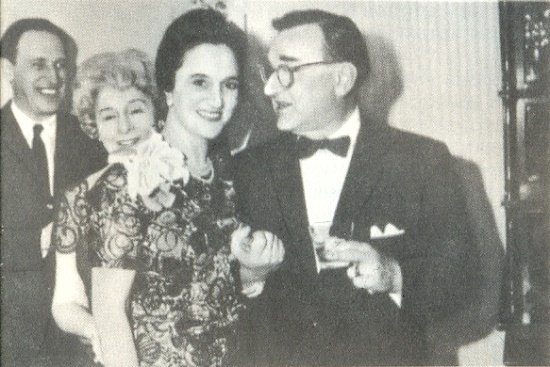